Six Months With My Electric Scooter: A Review of the Xiaomi M365

As I took a wobbly ride on a rented electric scooter earlier this year, my first thought was “this is not for me…”

I couldn’t figure out where to comfortably put my feet, and I found myself gripping tightly onto the handlebars as the tiny wheels struggled with the gravelly ground. I generally felt pretty self-conscious trying to weave between pedestrians and cyclists on the mixed-use path.

Fast-forward a few months, and I now use my own electric scooter almost everyday. I can’t remember how I coped without it!

The change occurred because I moved house; previously I could walk to work in around 30 mins, now it would take around an hour, entirely uphill. I wanted a convenient, fast and cheap form of transport for my commute, since I don’t own a car.

I considered a bike, but after a short trial I realized that I am just not cut out for a 3 mile uphill cycle ride first thing in the morning.

I considered an electric bike, but I live in Berkeley where bike theft is rife, and the idea of having to search for secure parking everyday and remember to remove the battery wasn’t appealing.

So I reluctantly revisited the electric scooter idea. After a short learning curve, I now absolutely love it and hope more people will consider getting one!

My scooter of choice is the Xiaomi M365 Folding Electric Scooter, which at the time seemed like the obvious winner in terms of both quality and price. There may be other good options available now. 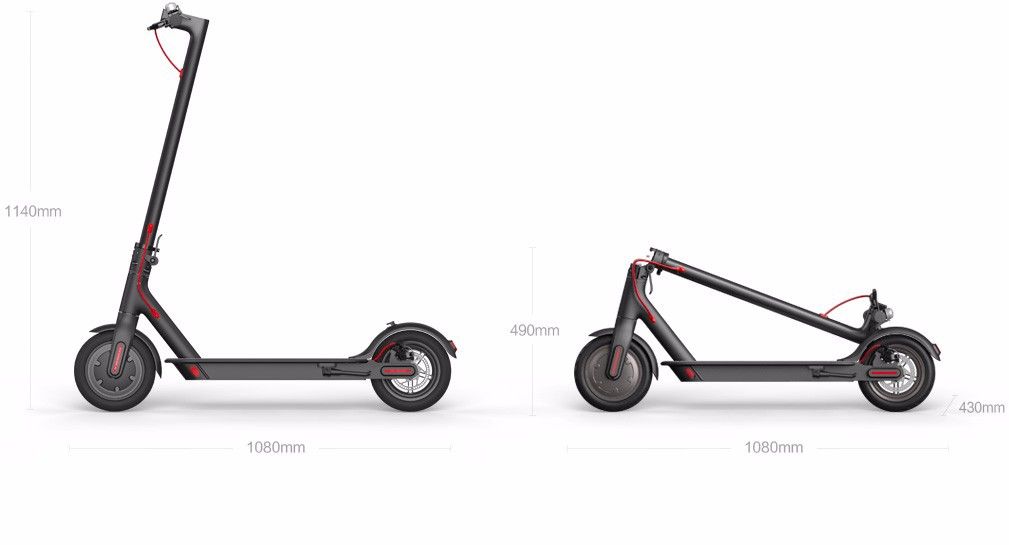 It’s available for $499 on Amazon (this is how I got mine). It can reach speeds of up to 15mph and the battery lasts for about 18 miles. You charge it with a convenient charger that plugs into a standard power socket. I charge mine in my apartment overnight; I think it takes roughly 5 hours to get fully charged. 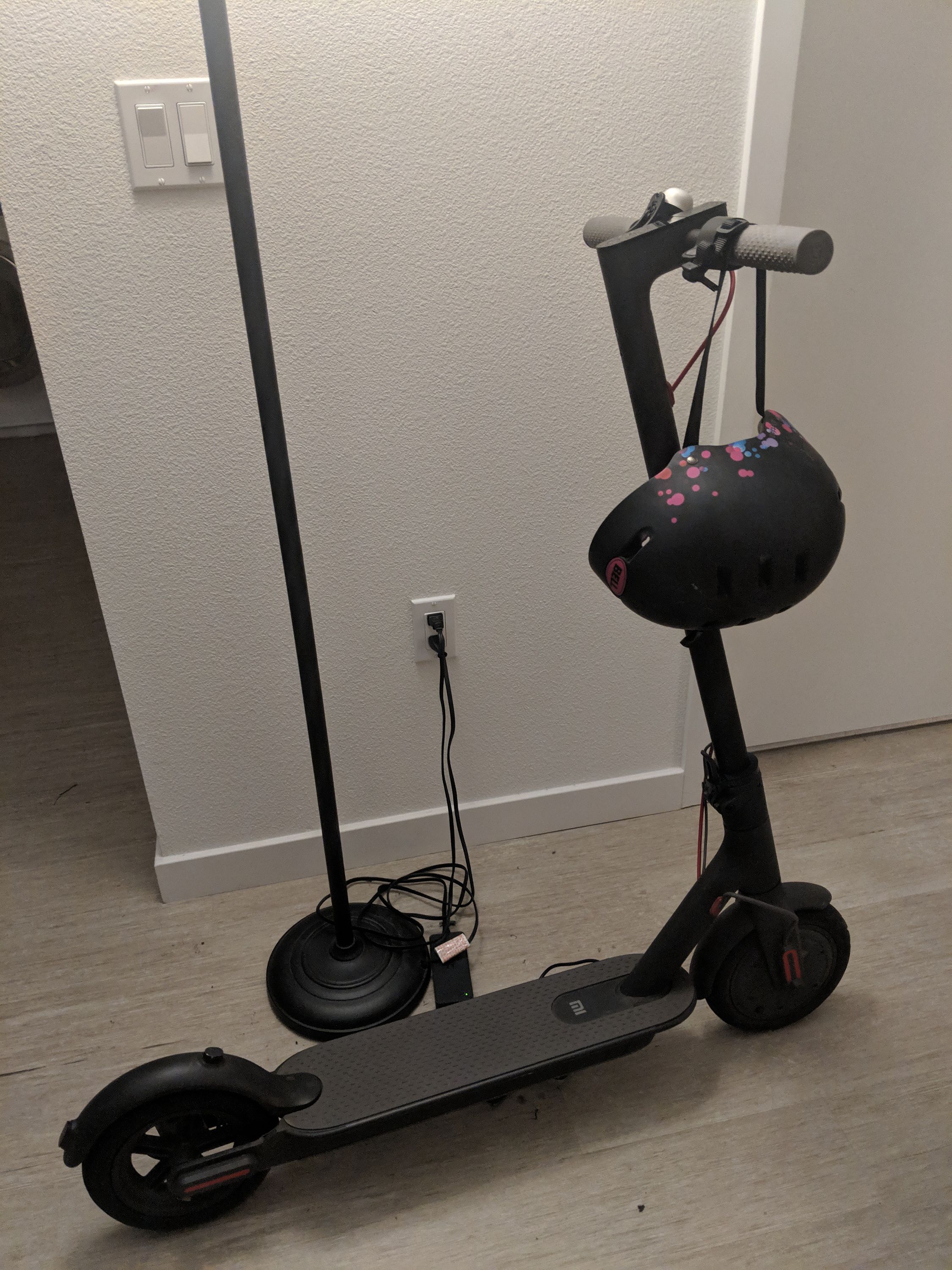 Charging the scooter in my apartment

The scooter reduces my commute from ~1 hour to ~15 mins. And (once you get used to where to put your feet and learn to relax your grip) it is just an incredibly fun way to get to work. I literally look forward to it everyday. 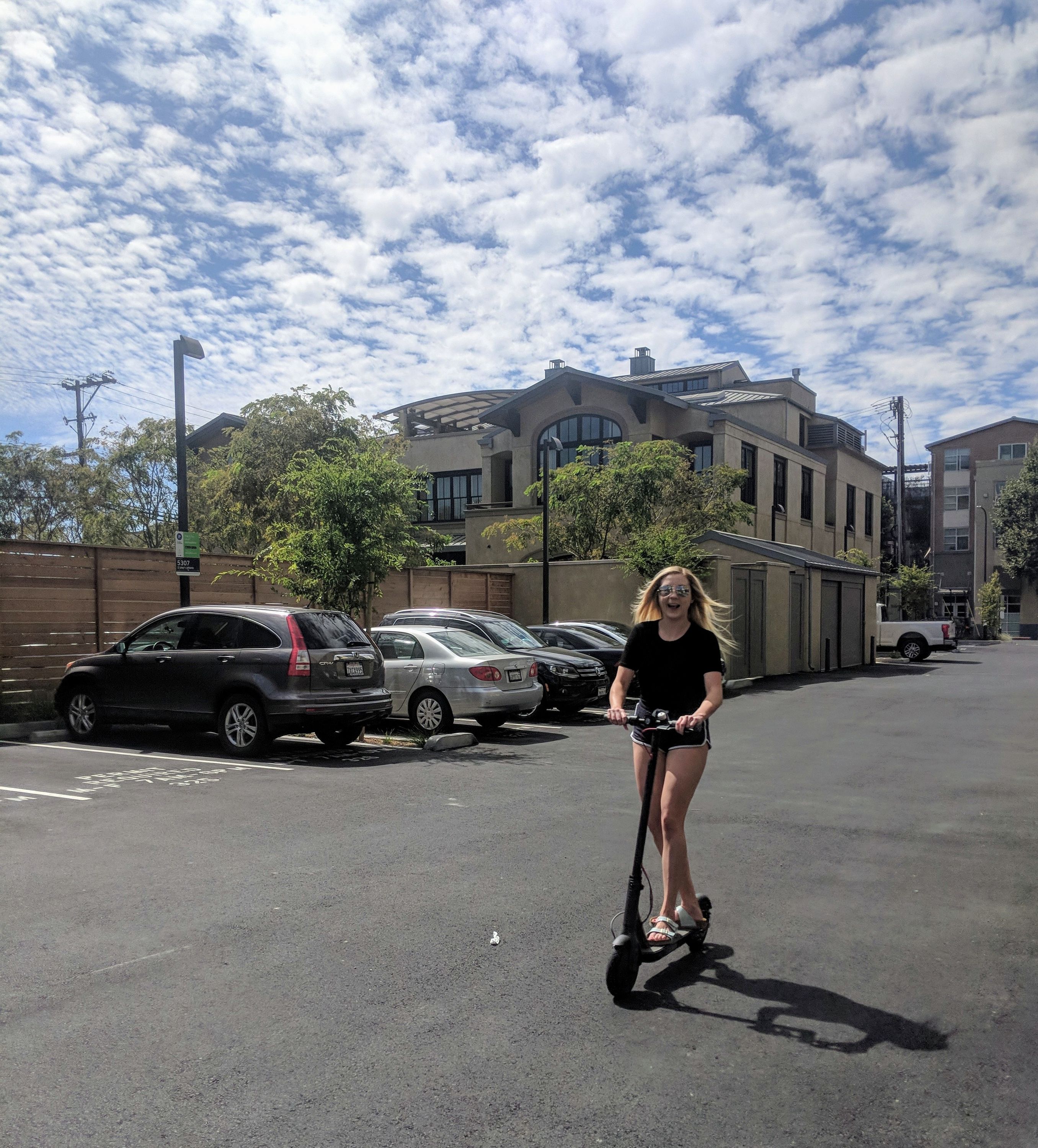 My sister on the scooter. Look how much fun she’s having!

It’s also reduced my Uber and Lyft usage, and made trips to places that previously felt somewhat burdensome into a breeze. I can nip out to the grocery shop, meet for coffee around Berkeley, and even get to medical appointments in Oakland with no problem. I once even went from San Francisco Embarcadero all the way over the Golden Gate Bridge, and almost got to Sausalito before it ran out of charge!

One of my favorite features is being able to fold the scooter in half and put it in the trunk of a car. This means I don’t need to plan out exactly how I will get home, since I can always scoot somewhere and then decide to get an Uber back if it is too dark/cold/far. This is one of the main advantages of a scooter over a bike — I used to cycle everywhere but getting home after an evening event was often a pain.

The folding feature also has the advantage that you can usually take it in with you wherever you’re going. You can pick it up and carry it for short periods, and it can easily fit under a desk or a restaurant table so you don’t need to worry about finding a secure place to store it. Having said that, one of its disadvantages is that there isn’t really a way to lock the scooter up in the same way you can lock up a bike. You can’t scoot somewhere, lock it up, and then go for a hike. You can’t scoot to a mall, lock it up, and then go shopping. You kind of have to take it with you, which isn’t always convenient.

The scooter comes with an app that allows you to configure certain things, including keeping the red rear light on whenever the scooter is on, which I use. I also enabled the setting that rings your phone if someone tries to use your scooter without permission, but I’m not sure if this would do much to deter theft since it’s not exactly hard to pick the scooter up and carry it away without even turning it on.

The built-in lights are really convenient — another thing that I found annoying about cycling was remembering to keep my lights charged. With the scooter, I never have to worry about this, the lights are there when I need them and they do a pretty good job of lighting my way. I do tend to go a bit slower when it’s dark as I can’t look as far ahead as I normally do, but it’s not a big deal.

One final advantage of the scooter is the ease with which I can hop on or hop off. I generally use the road when I’m on my scooter, but I can also walk it across pedestrian crossings, or dismount quickly if there’s a situation that looks unsafe.

The main problem I’ve encountered on the scooter is dealing with poor-quality roads. Juddering along on an uneven surface is not particularly pleasant, and the small wheels even minor potholes pretty terrifying. Having said that, I have found that it can tolerate more than I expected. I’ve learned the hard way that unexpected holes in the road are not fun, but they haven’t thrown me off yet. It’s definitely easier going on familiar routes; I tend to go a bit slower when I’m not used to the road surface.

Riding one-handed feels to me much more difficult than it does on a bike, so giving arm signals to indicate a turn can be tricky. It would be great if there were some lights built into the ends of the handlebars to help indicate turns.

Riding on the flat or downhill is a joy, and gentle uphills are fine when you’re on full battery. But anything steeper is difficult, and it’s noticeably worse when the battery is less than half full.

The image below shows the elevation of my 3 mile commute. The scooter handles the majority of it brilliantly, but I do need to give it a bit of a manual kick when I get to that final short uphill stretch. Of course, coming home at night is entirely downhill so that’s no problem at all!

The elevation of my 3 mile commute

Another slight downside with exchanging a bike for a scooter is missing out on the exercise. I miss the smug sense of virtue I got by walking or cycling to work and getting my exercise in before the day had even begun. At least I still get to feel environmentally smug compared to cars…

Speaking of cars, I’ve found that they’ve generally been pretty good around the scooter, although I try to stick to Berkeley’s ‘cycle boulevards’ rather than traffic-heavy roads.

As a not-quite-car and a not-quite-bike and a not-quite-pedestrian, it can be quite difficult to figure out what rules of the road you should follow on a scooter. I tend to behave basically like a bike, but there are occasions where it feels more appropriate to behave like a pedestrian. I’m looking forward to when these conventions are more firmly established, since I currently feel like I’m sometimes judged by other road users for not doing what they think is correct. Or maybe I’m just projecting my own confusion!

Although the folding feature is super convenient, it’s quite heavy so only suitable for carrying short distances. I’m excited about the possibility of future, lighter models.

And although it’s great for popping out to pick up a few groceries, it’s not really suited for a big shop as you can’t carry lots with you. However, one solution is to scoot to the store and then get an Uber home with all your shopping and the scooter in the trunk.

Another consideration worth knowing is that you’ll need to get a backpack if you want to carry anything while on the scooter; unlike a bike there isn’t any storage space via a basket or panniers. I’ve tried using a cross-body bag and it’s ok as long as it’s light, but you’ll be pulled off balance with anything substantial. Backpacks are the best solution, and I’d suggest getting one big enough to fit your helmet.

Finally, while this isn’t a problem where I am, you may want to check the legality of electric scooters where you are. In the UK, they are not legal anywhere except private land which is a huge shame. Given the potential of electric scooters to reduce congestion, get people breathing fresh air, reduce environmental damage, and give people a convenient, quick and cheap form of urban transport, I really hope lawmakers and city planners will start to take the benefits seriously.

If you often make short trips (< 5 miles) and the roads are of a decent quality, I’d highly recommend considering an electric scooter. It’s super convenient and a lot of fun.