I’m sorry Looper, I know it feels like I’m picking on you. I actually really enjoyed you, but you did spark a few issues I have with big Hollywood sci-fi films. Last time I wrote about time travel, this time I’m moaning about depictions of the future. Maybe I’ve just had bad luck and only seen the films with underwhelming visions of the future — if so I would gratefully receive any film recommendations in the comments!

The problem I have is that the ‘future’ we are presented with often seems to be simultaneously constrained by the perspective of the present yet lacking credibility because existing social and technological trends have been ignored. Instead of looking at how society and technology has developed over time and using this to construct an interesting future world with new cultural dynamics and plausible technology, it feels like writers just take a snapshot of current social dynamics and throw in a few shiny gadgets. In Looper there was a flying robot seed-sower. I mean really.

This kind of robot technology has been predicted for years and has never taken off (pun retrospectively intended). Shouldn’t we be learning from this? We probably even have the technology to make stuff like that but we don’t because no one really wants it… I’d like to see an extrapolation of the kind of technology that really has caught on — the internet, data collection, information sharing, mobile devices — all of which have changed the world profoundly, and provide us with an insight into the technology of the future.

And it’s not just this uninspiring technology that’s the problem — it’s that societal changes are also not taken into account. The 1882 lithograph by Albert Robida entitled ’Going to the Opera in the Year 2000′ illustrates my point. 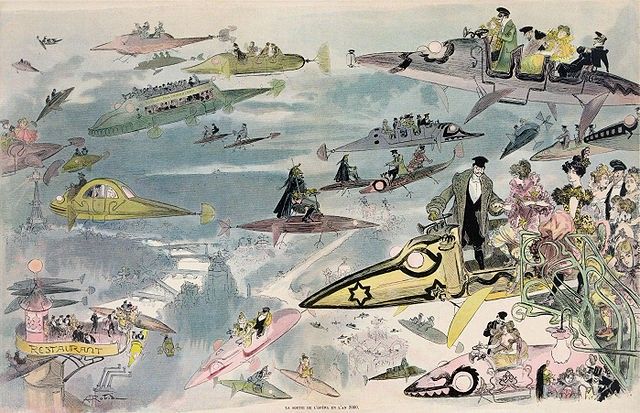 Not only do we not go around in flying cars, we do not wear Victorian clothes and, perhaps most significantly, most people no longer frequent the opera. Although the painting looks imaginatively at future technology, it fails to apply the same innovation to cultural and societal development.

Asimov — who I adore — is also an example of this. His creativity in dreaming up exotic futuristic worlds is unquestionable, but I still often find myself disappointed with the portrayal of women in his stories, which tend to be housewives, objects of sexual desire, and/or menial workers. In ‘The End of Eternity‘, apparently not one woman out of centuries and centuries of the future is technical enough to become an ‘Eternal’. People excuse this by saying ‘yeah well, he wrote in the fifties and that was kind of how it was for women’. But why, when he was writing about technology so far beyond our comprehension, was he unable to apply the same imagination to cultural and gender roles of the future?

The future is virtual

Perhaps we can forgive Asimov and Robida a little, as maybe the trends of cultural change weren’t so clear in those days — but now we have no excuse. We look back on on their predictions with our enlightened modern eyes and chuckle affectionately at the quaint inaccuracies — yet we fall into the same traps! Not only do we have their mistakes to learn from, we also have far more data on how societies develop and change. Although there is still a long way to go, over the last century we have seen great progress in acceptance of homosexuality, widespread intolerance of racism, and the breakdown of traditional gender roles. I would love to see more films exploring futures where trends like these continue.

But films like Looper still insist on patriarchal futures with macho men ruling the roost and women in mothering/caring roles. Additionally, they tend to involve physical violence and lots of gadgety guns. I find this frustrating as to me it seems clear that the warfare of the future will be cyber — in the near future, this may mean hacking into enemy computer systems. In the far future, killing someone may be more like formatting a hard drive than blowing their brains out. If we extrapolate the way things have been going, we are moving towards the virtual — augmented reality, holograms, digitalisation. In a world where physical strength doesn’t give much of an edge, shouldn’t we expect gender roles to evolve?

To me, many of the interesting possibilities of the future have been under-explored in Hollywood films. It’s not about flying robots and hover cars and super-shiny futuristic guns. It’s about data and information and communication that enables grass roots revolutions like never before. It’s about asking how society would change if everyone knew everything because Google was in our brains. It’s about the implications for cultural roles as the world becomes more virtual and less physical. I’m not asking films for accurate predictions of the future — I’m not that cruel — I’m asking them to try and transcend cultural blinkers, to examine current trends, and for a little humility to learn from the mistakes of the past. Maybe this could lead to depictions of the future that are creative, varied, thought-provoking, and above all, plausible.

Or maybe I just find action scenes a bit boring.