Ada Lovelace and the Bechdel Test

The parallels between women in tech and women in media 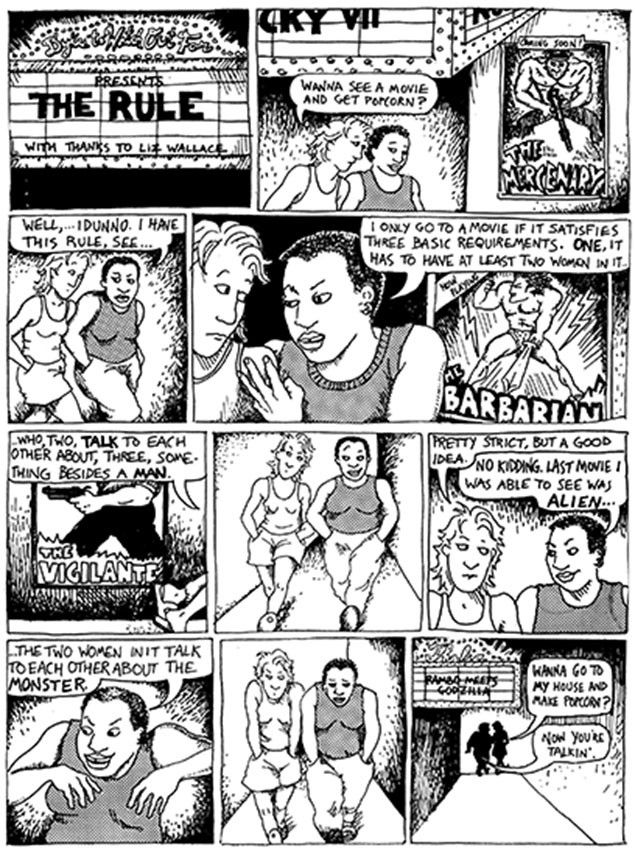 Have you heard of the Bechdel test? It’s very simple. A film or TV show passes the test if there are at least two named female characters who have a conversation with each other about something other than a man. It’s meant to be a rough rule of thumb for spotting gender bias in media. It sounds like a pretty low bar, but it is surprising how few mainstream shows and films pass.

Today is Ada Lovelace day, named after the first ever computer programmer, and it aims to celebrate the achievements of women in Science, Technology, Engineering and Maths (STEM), and highlight the fact that there aren’t enough of us. As a woman who works in a technology role in a media organisation, I feel strong parallels between the underrepresentation of women in both fields, and I’m hoping to draw your attention to why this matters and what we can do about it.

According to a recent study, in the top grossing films of 2013, women comprised only 30% of the speaking roles. Considering women make up over 50% of the population and buy 50% of cinema tickets, this is a bit weird. Even worse, just 15% of protagonists were women. We tell young girls that they can do anything they want, that they can be the stars of their own life adventures, yet this is completely at odds with the narratives they see all around them. Even films with female leads often fail the Bechdel test, reinforcing the notion that women’s lives revolve around men. Boys are socialised to think they can do anything, and girls are socialised to think they can help boys do anything.

There are plenty of excuses for this disparity, most of which centre around “well that’s the format that brings in the money”. In fact, a survey has shown that films that pass the Bechdel test performed just as well at the box office as those that didn’t, and may actually have a better return on investment overall.

Similarly, there are plenty of excuses trotted out when people discuss why there are so few women in the tech industry. The most common ones crop up time and time again, so I’ve tried to debunk them here. Often, they are a convenient way of disguising some uncomfortable truths — that we need to examine our unconscious biases that cause us to treat boys and girls differently from a young age (often reinforced by what we see in the media), and the presence of institutionalised sexism in the supposedly ‘meritocratic’ tech industry. It breaks my heart that so many women are missing out on discovering the same passion for science and coding that I have, for no good reason whatsoever. And when we have such a shortage of people going into STEM, we can’t afford to lose them.

Funnily enough, I think both industries have the potential to help each other out…

A plausible reason for the woeful portrayal of women in films is the fact that so few women are involved in making them, with figures reporting that women make up just 22% of crews. This becomes particularly apparent in technical areas: women make up 17.5% of visual effects and just 5% of camera and electrical. If we could encourage more women to choose technical careers, perhaps more of them would go into these areas and the gender balance of filmmaking would improve from the ground up.

And how do we get women interested in technology? By improving our portrayal of them in the media! Overwhelmingly, characters playing STEM-related roles are men, and scientists and coders are usually depicted in out-dated stereotypes as socially inept geeks. Neither of these is accurate, and neither is conducive to attracting women to technology. This is compounded by the fact that women are presented as one-dimensional characters whose lives revolve around men. We need stories that reflect real women, who have all kinds of interests, passions and motivations, and that show that there is no reason why science or technology shouldn’t be one of them. Narratives are powerful. The influence of the media could effect real cultural change.

And things are changing — the tech industry is starting to realise that having a conference with no women speakers is not acceptable, and that we need to take steps to make the industry a more inclusive place. Last week, we found out that Paul Feig is making an all-female Ghostbusters film. Considering the number of all-male action films, this really shouldn’t be controversial, but it is nevertheless a huge (and in my opinion, welcome) disruption to the Hollywood status quo. Given the immense success of the Hunger Games and Frozen, there is clearly a market for stories that position women as independent agents and protagonists in their own right.

So, for those who work in these industries, I’d like to put forward an Ada Lovelace Day challenge:

If you work in technology, stop assuming ‘women just aren’t interested’ or any other of those myths, and start reading up on the real reasons women are underrepresented in the industry, and what you can do about it. A good place to start is to examine your own unconscious biases, listen to women’s experiences without getting defensive and resist the temptation to derail discussions.

If you’re a content producer, start noticing the subtle gender biases that are all around us in the media, and think about the very real damaging effects these could have. Don’t succumb to lazy stereotyping in your scripts; instead, make content that is challenging and original.

The BBC is all about innovation and pushing boundaries. So let’s stop using the same tired old boring gender tropes and instead, like Ada, let’s do something really revolutionary.